After last year’s sadly snowed-off events it was a huge relief to avoid another weather-affected season.  This is especially so, as, like last year, we have some phenomenally talented young runners in the school just now and groups this good do not come along too often.

The Tuesday and Thursday Runs have been a huge success this year, with records tumbling a-plenty.  By virtue of being the only girl ever to try, Iona took the Form 6 three-lap record and Willow in October ran a remarkable 14m 26s to take the Form 5 Girls’ record.  Running together all year Wilf and Eck repeatedly lowered the Form 6 Boys’ record, finally ending on 13m 51s in March.  Also in March Eliza bagged the Form 4 Girls’ record with a 14m 20s run over the 3K distance.  George too came in in a remarkabe 11m 54s for the Form 4 Boys’.

The Patrol Cross-Country Relay saw a huge turnaround as we managed to include near every pupil in the school – more than double the number previously included.  Running the 4.5-mile course from school to the far end of John Muir Country Park, over the seven legs and four teams for each of the four patrols the Owls eventually won out, with the Wolves second and the Lions and Woodpeckers tied for third.

The Compass School’s XC was cancelled so it was down to Belhaven to host the revamped former I.A.P.S. event, now called the Scottish Independent Schools’ Invitational Cross-Country Championships.  This event was bigger than ever, with 363 competitors in the U-9, U-11 and U-13 boys’ and girls’ sections, and over 1,200 spectators.  Belhaven fared well, finishing second of the nine teams in the U-9 girls with Willow winning the race and coming only two seconds off the course record, and seventh of ten in the U-9 boys.  The U-11 races were extremely competetive, and extremely large – our largest ever numbers at 77 and 70 each for the boys’ and girls’ runs.  Eliza continued her good pre-race form in coming in in eighth position and our star improver of the season, Caroline, in twelfth.  Overall Belhaven came third of the 13 schools, beaten by St. Mary’s and Loretto.  The boys’ race was an exceptionally tight affair, Edinburgh Academy a just pipping Belhaven into second of the fourteen schools with George (3rd), Jack (11th), Harry (14th) and Tommy (20th) all doing well. 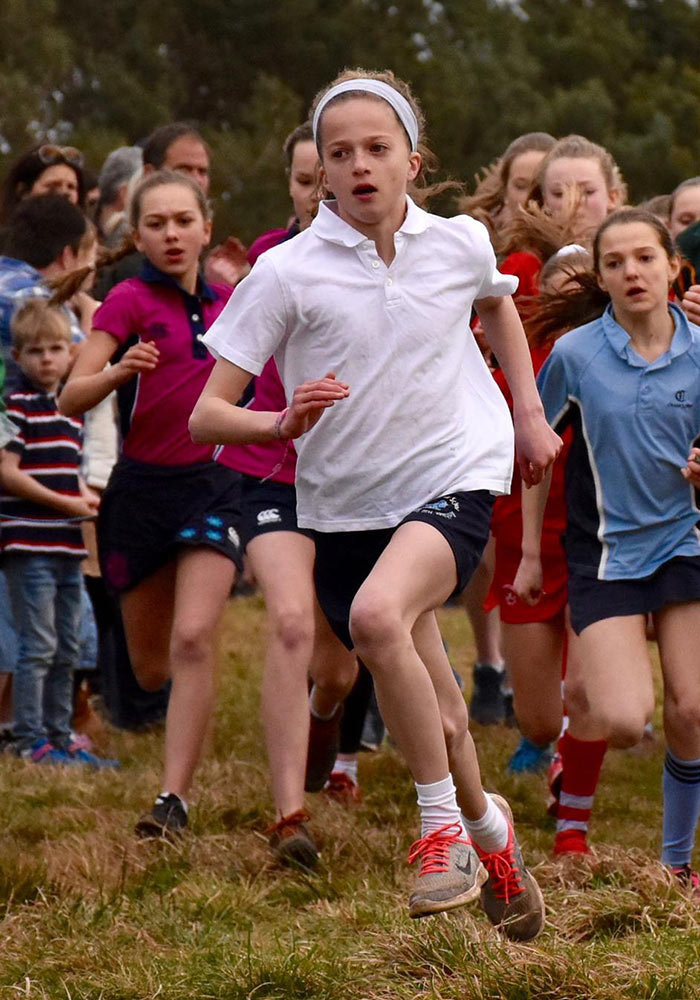 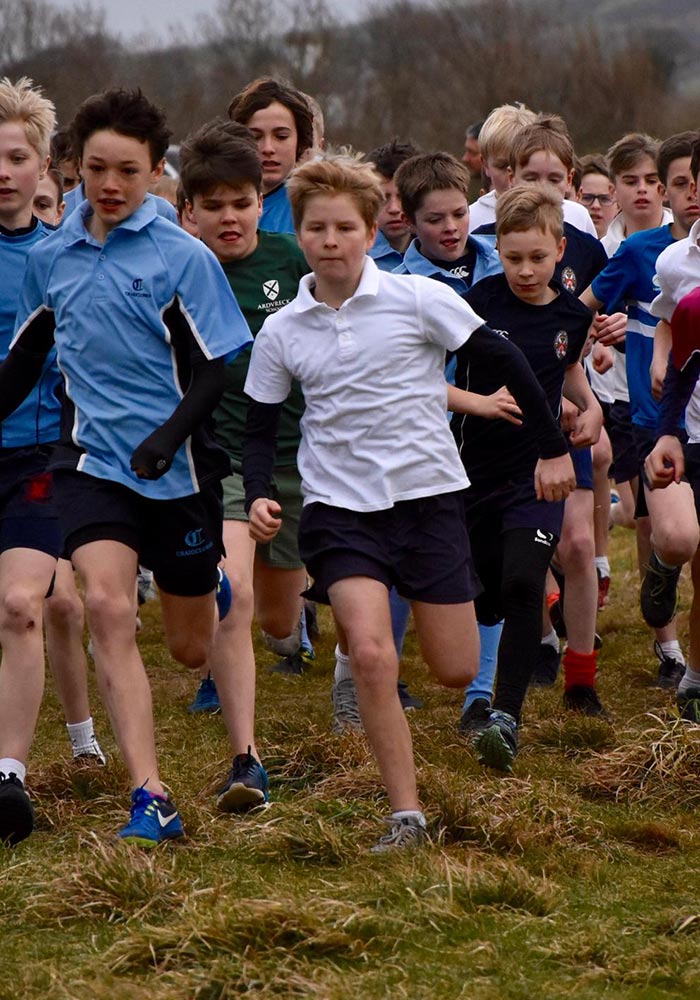 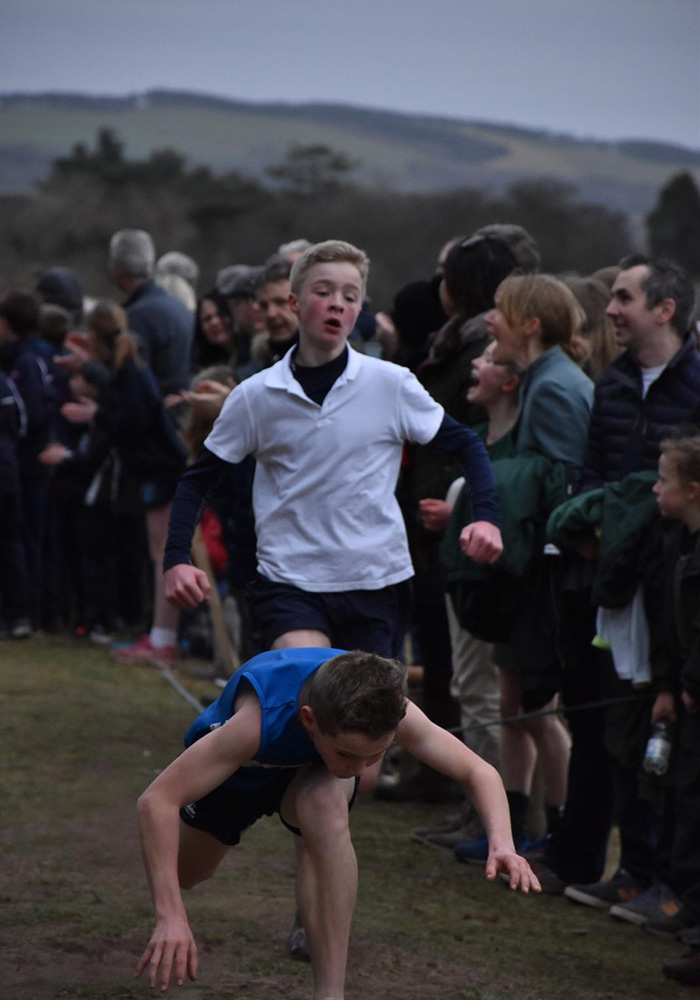 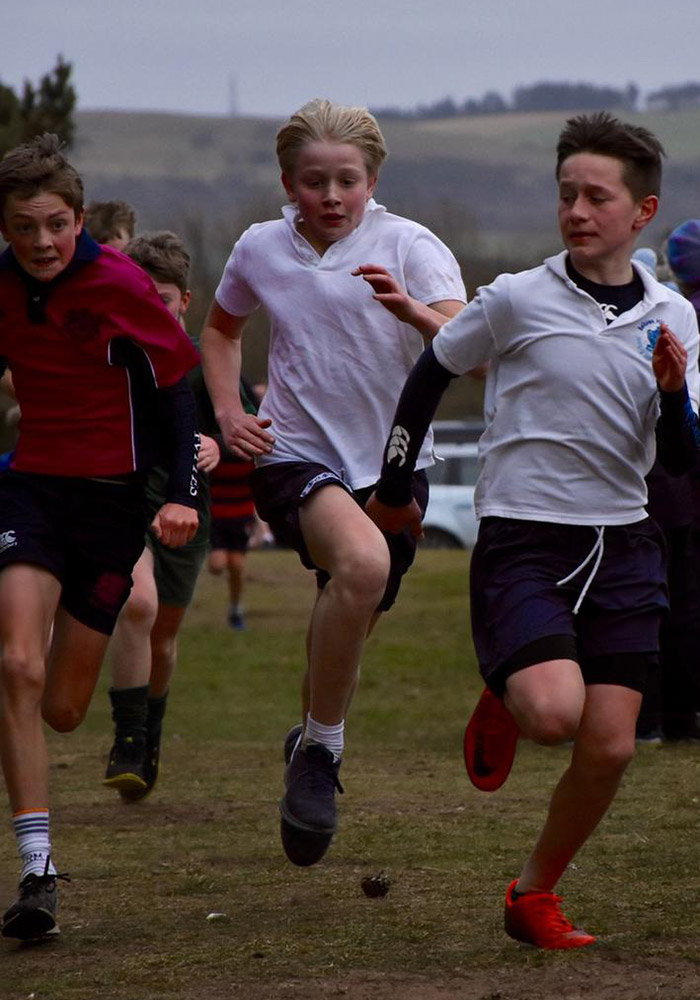 In the U-13s Belhaven were set for strong performances but the girls lost two key runners in the lead-up to the race and this cost us the win, pushed down again into second place by St. Mary’s.  Cleodie was outstanding in finishing in 12m 46s, just ten seconds off record pace over 1.92 miles and indeed she won the event, able aided by Alice in fifth, Daisy in eleventh and Ophelia two places further back.  The U-13 boys’ race was however won by Belhaven, comfortably in fact, as William (7th – after taking advantage of a rival’s last-minute stumble), Joe (11th), Charles and Freddie J. were all brought home ably by captain Freddie S. in sixth.

Next up was the Merchiston XC, a short but fun relay event.  Our U-9 team was hit by injuries on the day as we lost our top two runners and we came in in 9th and 12th positions out of 12, led by captain Harry.  The U-11 team was very successful and won the race by eight seconds, a country mile in a race such as this.  Harry, George and captain Jack excelled, especially Jack who opened up the gap to second.  The U-13 team fell agonisingly short, finishing just 5.5 seconds short in second position over the course of the 3.87 km race.  Freddie started well and put us in second and Joe the reeled in his opponent to lead after two legs.  William dominated his leg right up to the last 50 yards but was pipped by another runner and so we took the silver medal.  Our B- and C-teams came in eighth and fifteenth of the 18 teams, the former beating two A-teams. 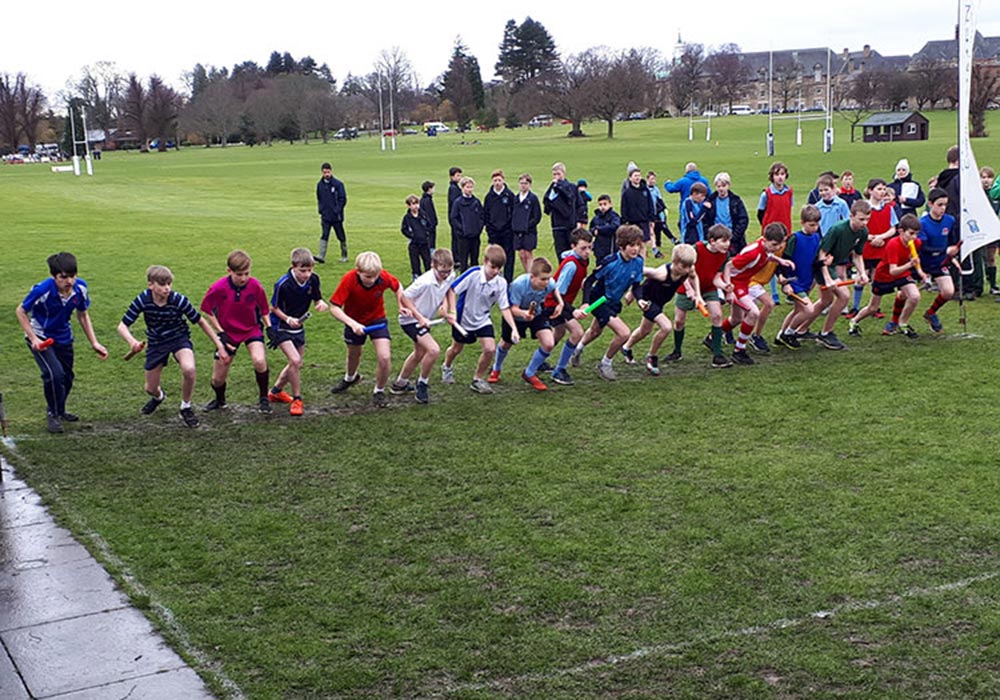 We the had an exceptional day at the Longridge XC and came home with three firsts and a second from the four races.  The U-10 girls were very strong to start with, Eliza coming home in second place, followed by Willow in fifth, Sophie eighth and Arabella ninth.  24 points’ total was enough to win the race in horrifically wet conditions.  In the U-10 boys’ race there was only ever likely to be one winner and so it panned out; George coming home first by a country mile, with Arthur sixth, Hugo seventh, James eighth.   The boys looked like they had auditioned for a Jackson Pollock painting afterwards.  James’ two slips were a highlight for many.  The U-11 race for the girls was close but was deservedly won by Loretto.  Led by Caroline in third, Belhaven scored just 23 (Farrah fifth, Freya sixth, Bea ninth, Louisa tenth and Robyn fifteenth) and we came second.  The U-11 boys was also a comfortable win for Belhaven, Harry just pipping Jack by a hair’s breadth to third, Andrei coming home in ninth and Theo tenth. 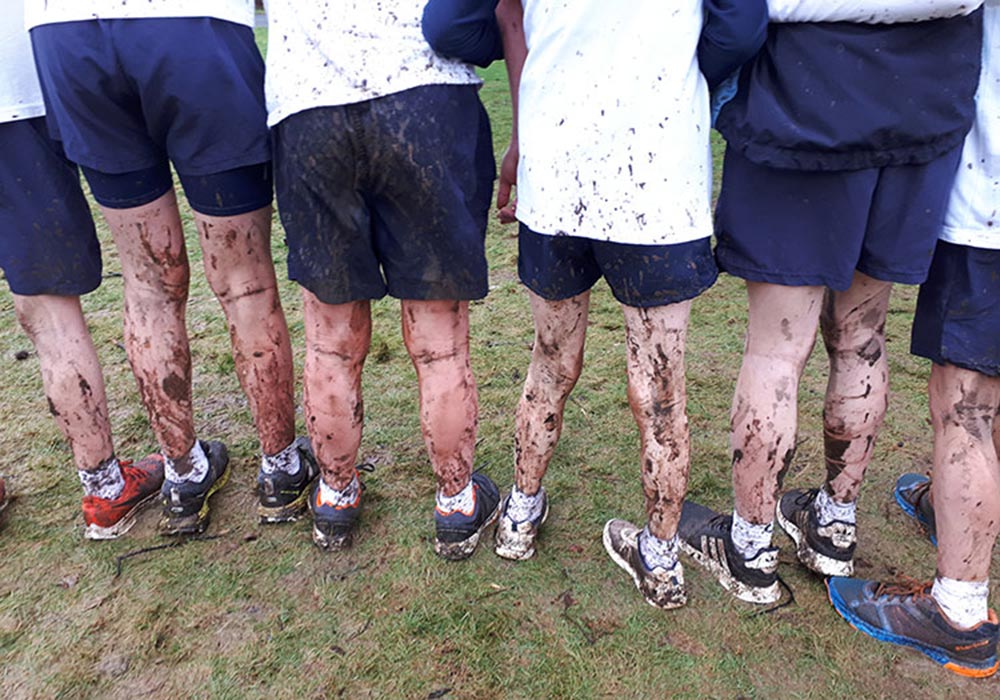 In the last week of the spring term we held our annual Individual Cross-Country, a 2K run around our grounds.  Freddie S. won the day, with Cleodie second, a fantastic achievement to beat all of the Form One boys.

The Form Ones were treated (?) to a new run this year which I hope to continue throughout the years.  They all attempted to run a ‘Parkrun’, a weekly 5K run which occurs all over the country.  Our nearest run is at Lochend Woods and Charles came home first in 22m 50s, beating Mr. Curry into second.  Every Form One bar one managed the course and we had a terrific morning as to boot fifteen parents also joined in the run. 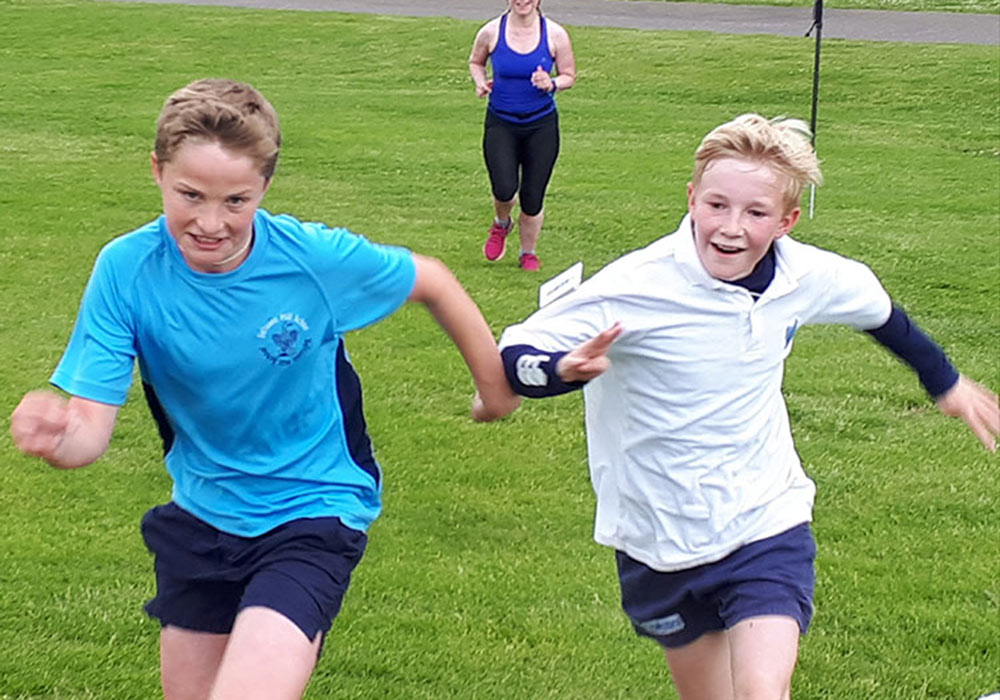 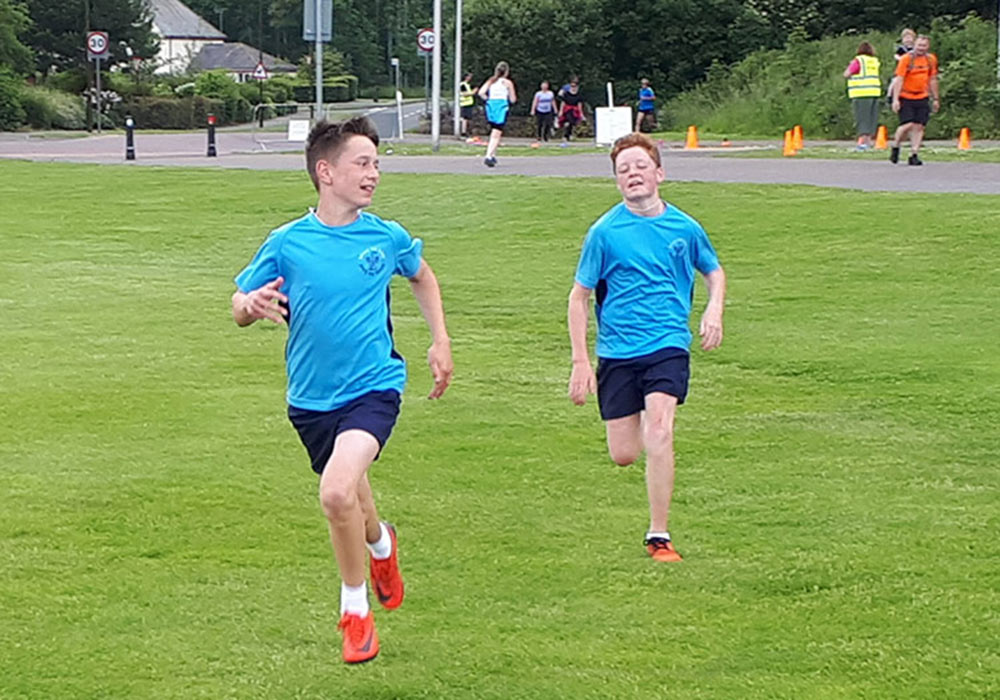 Lastly, in the previous year I introduced a new event – a Record Attempt in the summer 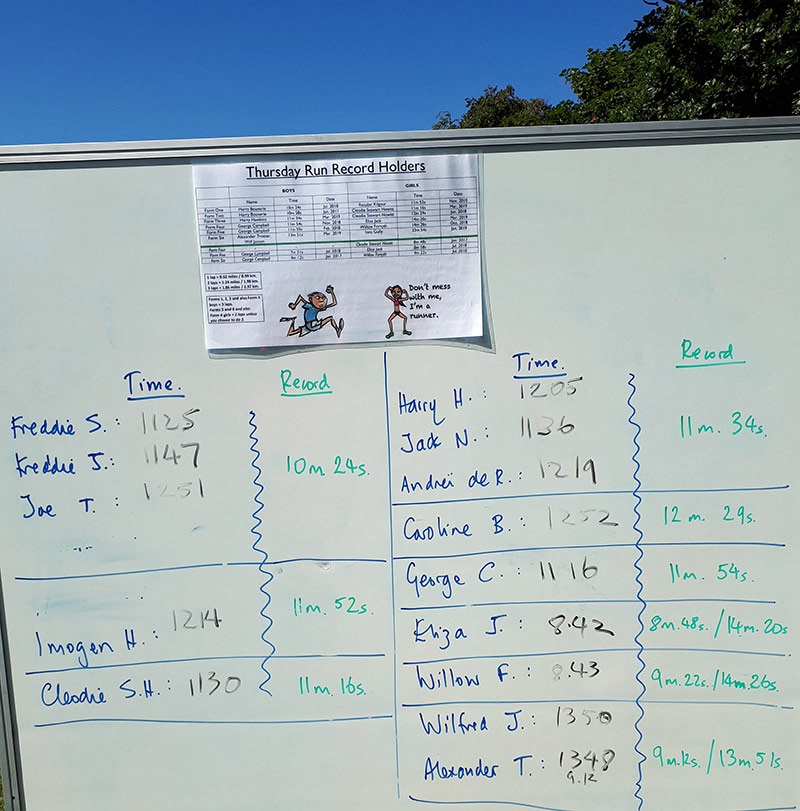 term.  This is because the ground is often so poor during the spring term that running times are severely compromised.  As a result we have one day in the summer term when the ground is harder and the school cheers on its best handful of runners only as they have one final run round the old course in an attempt to get a record.  This year was as successful as last as many records fell.  Whilst Cleodie and Jack N. just missed out on the Form 2 Girls’ Form 3 Boys’ records, George took the honours in smashing his own record of 11m 54s for the run, by running the 2.85K race in 11m 16s and in-so-doing outpacing our international athlete, Mr. Riddle.  Eliza and Willow also took new records in the Forms 4 and 5 sections, finishing in 8m 42s and a second later respectively, while Eck took a second and three seconds off the Form 6 two-/three-lap records to finish in 9m 12s/13m 48s.

Although pride of place must go to George for his outstanding run at the end of the year, the Runner of the Year is Cleodie.