Belhaven Hill School has won the UK-wide, PA Raspberry Pi Competition 2022 for ‘Innovations to save the planet’ (years 7-9) for their ‘Project Polar Bear’, an automatic bin opener that sorts different rubbish using AI

The competition for all school aged children in the UK is sponsored by PA Consulting and their partners who include Rolls Royce, The Economist, Anglia Ruskin University, Rentokil Initial and Nationwide Building Society. Now in its tenth year, the PA Raspberry Pi Competition challenges children to invent systems that could benefit society using their STEM skills and a Raspberry Pi microcomputer. This year, the focus was on ‘Innovations to save the planet’. 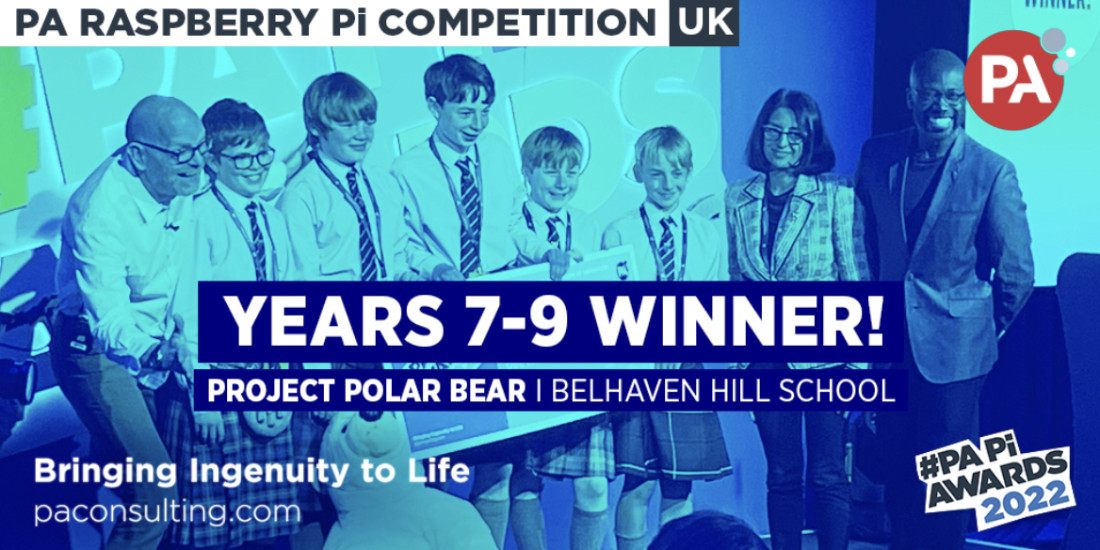 “The arrival at Belhaven of Head of Computing Will Pook in September 2020, the school’s recent investment in a digital education programme and encouragement from teachers and parents have helped produce a fantastic story of perseverance, ingenuity and, ultimately, success,” says Olly Langton, Headmaster of Belhaven.

The five Year 7 boys at Belhaven, Charlie, Tom, Harry, Laurie and Fin, decided to create a waste management system called Project Polar Bear. They used Python to programme the Raspberry Pi and a series of Servo motors to build a prototype using recycled wooden pallets and modified bins. Waste material is scanned and identified with the relevant bin lid opening to allow the rubbish to be correctly thrown away. The AI has been trained, the 400 lines of code developed, the bin-opening devices iterated and reiterated. 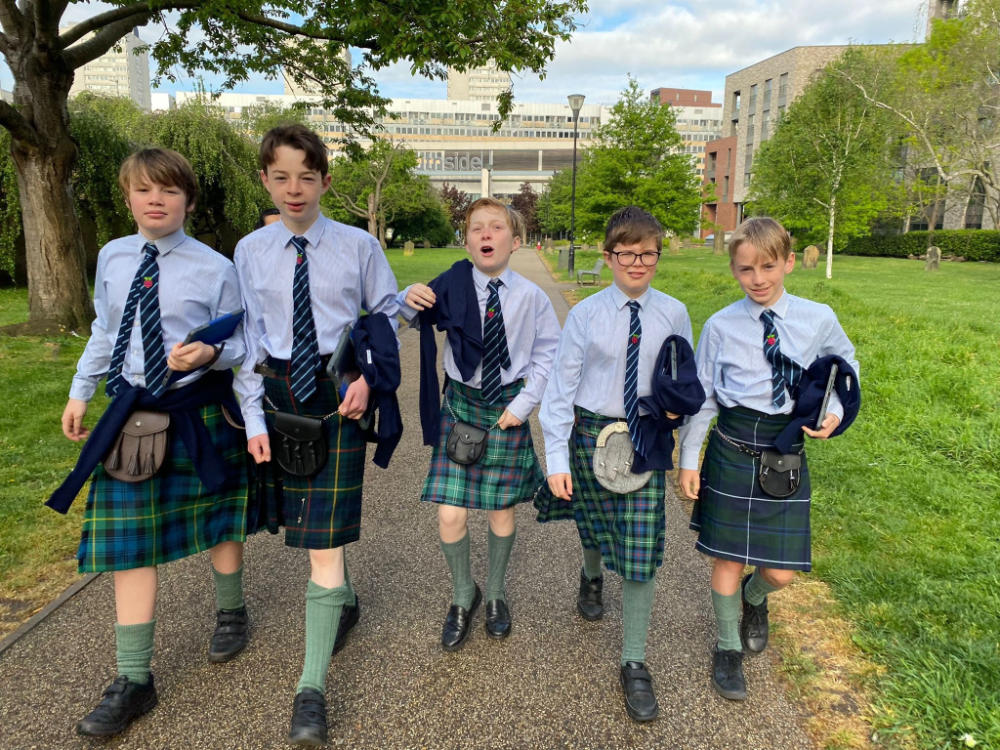 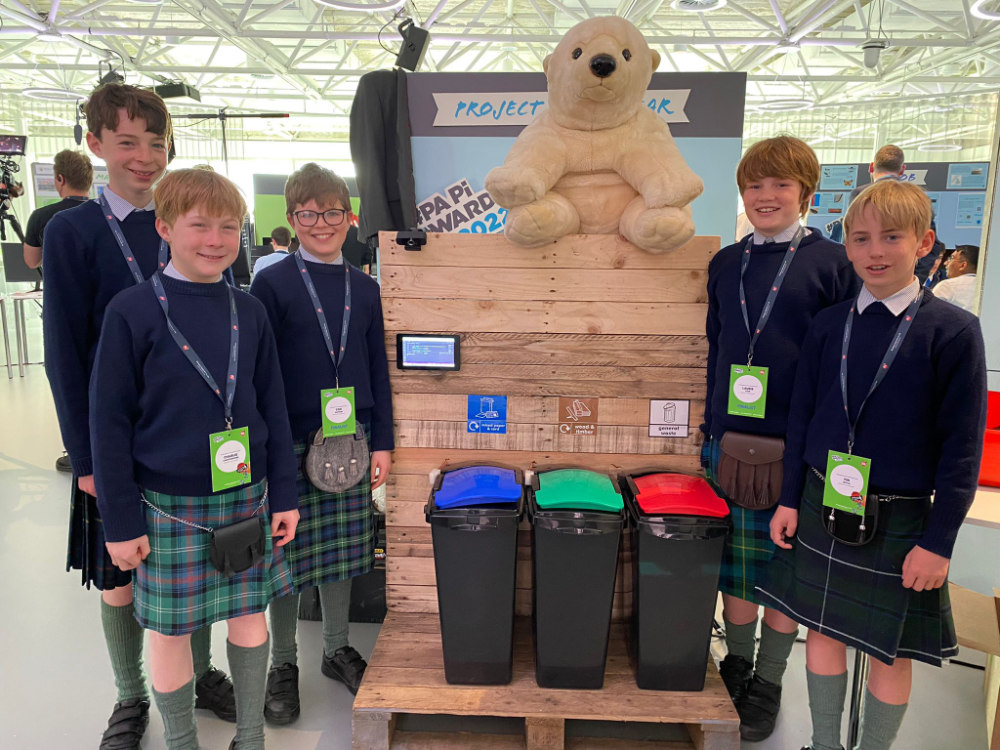 “12 schools were selected from more than 300 entries, across 3 different age groups,” says one of Belhaven’s governors, Shane Corstorphine, who helped grow Skyscanner as its CFO. “The event took place at the Science Museum in London and the team had interviews with execs from 15 companies including Microsoft. An amazing experience! Enormous thanks to you all for helping turn this from a dream to something very tangible.”

“The boys have also been busy at school with their academic, sporting, artistic, drama and musical commitments,” continues Olly Langton. “They have worked hard on their Raspberry Pi competition entry, sacrificing their own time but benefiting from the length of our school day and the support of teachers, many of whom live on site, to fine-tune their project to competition-winning level.”

Their final entry was the Project Bear prototype, filmed in action, accompanied by a written submission explaining the trials and challenges of the process, as well as a video of the Belhaven team explaining each individual’s role.

“They’ve developed some valuable life skills as a result of entering this competition – it’s all part of the holistic education that we aim to provide here at Belhaven,” adds Olly Langton. “The team has learnt about the role of the tech guru, the project manager, the media guy and the materials expert.

“They have learnt the importance of sticking to a budget and planning their time to ensure that deadlines are met. Finally, they’ve learnt the vital process of understanding and applying different coding languages. This experience should help equip these young creators for solving the problems of the future.”

The ‘Project Polar Bear’ team travelled to London by minibus, accompanied by the prototype and their project icon, ‘Melville’ the Polar Bear. Finals day, Thursday 5th May, saw the team exhibiting their prototype, answering questions from industry experts non-stop from 10am to 4pm, and having the opportunity to ask successful STEM entrepreneurs and businessmen about their own experiences.

In the final, the boys from Belhaven competed against three other entries in their age category (Years 7-9). They were up against some brilliant concepts: a solar powered device that tracked the movement of the sun; a robot that drills the soil, then plants and waters seeds; and a mapping system to support the delivery of parcels via electric scooter.

In making their decision, the judges, representing Microsoft, the Design Council, Nestle, HSBC, the Army, the Raspberry Pi Foundation, as well as the sponsors, praised the reliable implementation of the AI. This was described as being of “complexity way beyond their years”, and the knowledge that all of the boys displayed when talking in such an articulate and enthusiastic manner about their project. 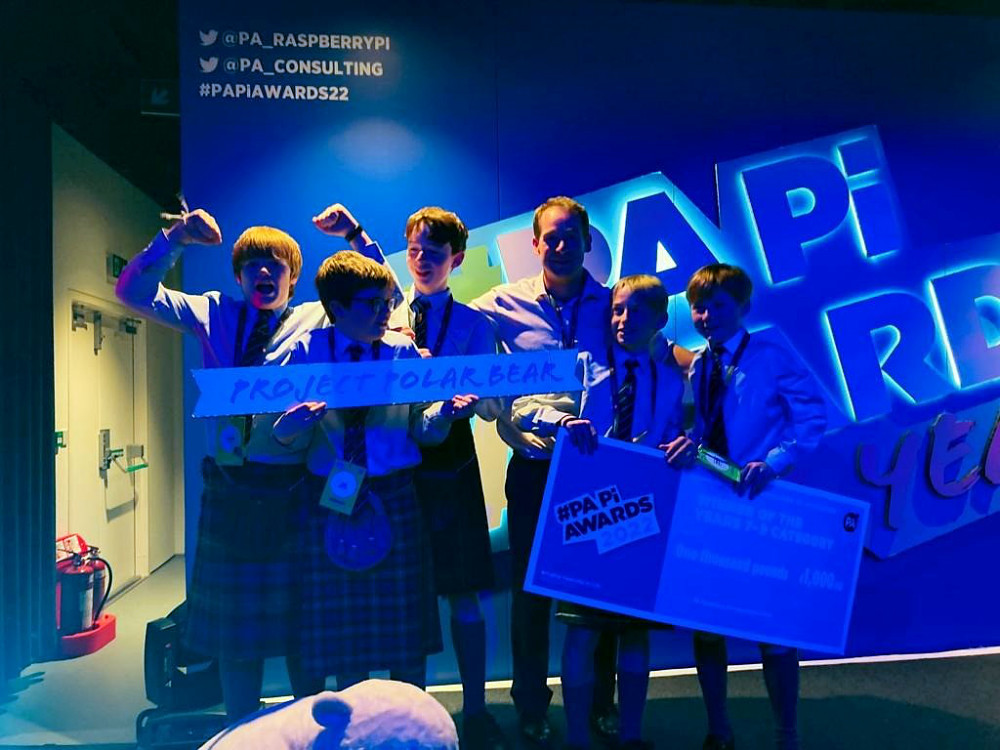 Olly Langton adds: “They liked that the project was ready to go and that it has the potential for a wide breadth of use – it could help the visually impaired, for example. But, to be told by various high-profile business experts that their project was ‘really cool’ was probably the icing on the cake…!

“This is the first time that Belhaven has entered a competition like this, so reaching the final was a phenomenal achievement. To win, in competition with such outstanding ideas, is a testament to the self-belief and expertise demonstrated by our young team. These have been instilled by Mr Pook’s resolute belief in the importance of our children learning to solve problems on their own – once given clear direction, they have proved that with time and support, anything is possible.

“This is the just the start – we now hope to enter multiple teams to the PA Raspberry Pi Competition next year as this success will inspire the younger makers to follow the example set by team ‘Project Polar Bear’.”

The winning Belhaven team add in their own words:

Laurie - the media guy says: “I didn’t expect that we would get to the finals, let alone win! All of the hard work has definitely paid off and I am so proud of what we have achieved as a team!”

Charlie - the hardware guy says: “I felt inspired by all of the other entries and what we might do in the future.”

Fin - the stand guy comments: “I think that Melville, the polar bear, was essential to us winning the award because everybody wanted to meet him.”

Harry - the boss guy says: “I had some insane experiences; the highlight was getting properly interviewed a couple of times during the day by a real journalist with a real film crew!”

Tom - the AI guy adds: “Entering this competition has really inspired me to continue with my coding and get better and bigger with my projects as it has shown me that we can achieve anything we want if we put our minds to it!”

Mrs Leitch, Head of Support for Learning, comments: “It was a day like no other; to be surrounded by such inquisitive young minds gives me hope for the future. The boys shone in a room full of like-minded people and it was a privilege to be there to support them.”

Mr Pook, Belhaven’s Head of Computing and Outdoor Education, concludes: “The boys have been amazing throughout the process. We have literally experienced blood, sweat and tears to get to London. This win really vindicates the hard work and pressure they have put themselves through.

“I’m sure these boys will have bright futures ahead of them and I am honoured to be a part of their journey. I can’t wait to go through the process again next year with a bigger group in the geek squad. The sky’s the limit!”