Another damp match day today, requiring liberal quantities of sawdust to prevent bowlers and batsmen alike getting too closely acquainted with the playing surface,  as Strathallan Prep. travelled south to play us at home.

Winning the toss, Strath. put us in to bat – fortuitously, as it turned out. A new opening pairing of Theo and Charles started us off and it turned out to be an inspired move as both boys took advantage of some friendly bowling and knocked off 49 runs off the first 4 overs. Theo fell in the 5th bringing Tommy to the crease and he and Charles continued to score with gay abandon. Eventually on 46, Charles lofted a straight drive over the bowler’s head for a six and immediately retired. It was a lovely innings with some fine shots and impressive running between the wicket – it was certainly a workout for Charles. His fifty means that in four matches, we’ve had two fifties and one century – impressive.

Charles’ departure brought Walter to the crease and he and Tommy held out until our fifteen overs were up. Tommy ended on a healthy 44 not out (off just 29 balls) and Walter on 9. The team total was an impressive 146 for 1 off 15 overs.

After a short break to let the worst of the rain pass, Belhaven took to the field with another new opening pairing of our resident spinner/wicket-keeper, George taking the new ball and being joined at the other end by Constantin while Hugo took the gloves. 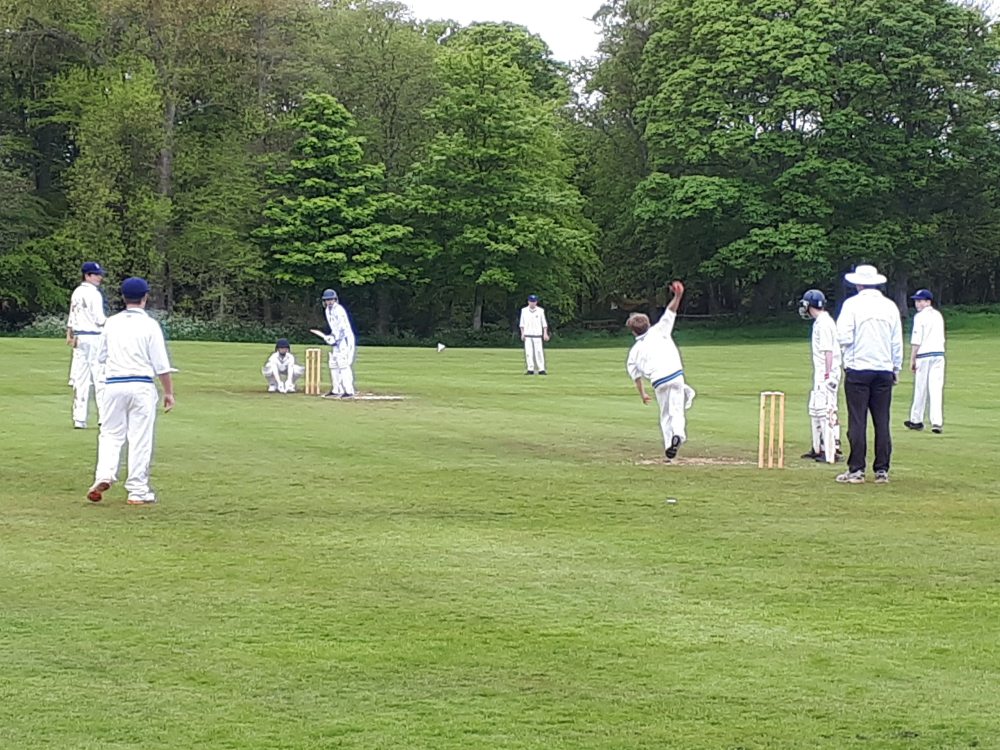 They both bowled some lovely balls, George, in particular, was very controlled (3 runs off 3 overs) though they didn’t manage to make a breakthrough. It was Tommy who eventually provided the first wicket and this was followed by a brilliant pick up and throw by George to run his man out with a direct hit.

Rory joined the attack and he bowled well to collect three wickets, one of them a fine catch by Harry, making up (perhaps) for earlier errors. And so, as we came to the final over, Harry eventually got to bowl and bowled possibly the best he has all year and was unlucky to get only one wicket in the over.

In the end, it was a very comfortable victory for the XI by 92 runs.

One or two things to work on, including discipline but we look forward to a match away at St. Mary’s next week. In the sun.