Bushcraft week - not for the faint-hearted!

Bushcraft week - not for the faint-hearted!

Bushcraft was an amazing experience and taught us lots.

On the first day we were all excited and ready to conquer the trip. There was not much time to build our shelters so we saved that for the next day and set up our tarpaulin for the night. We had a quick packed lunch and then set to work chopping the vegetables for supper. It was pigeon stir fry. We gutted and plucked a pigeon which was gruesome at the time but was soon a delicious meal. The wind was breezy whilst we were all cosy in our sleepy bags. 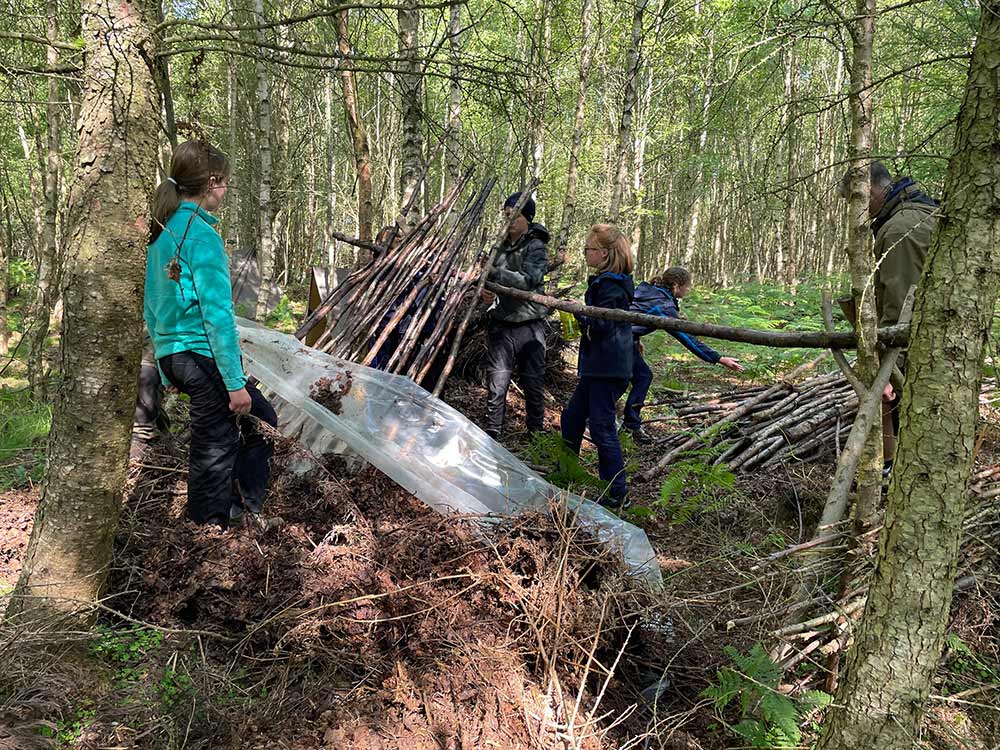 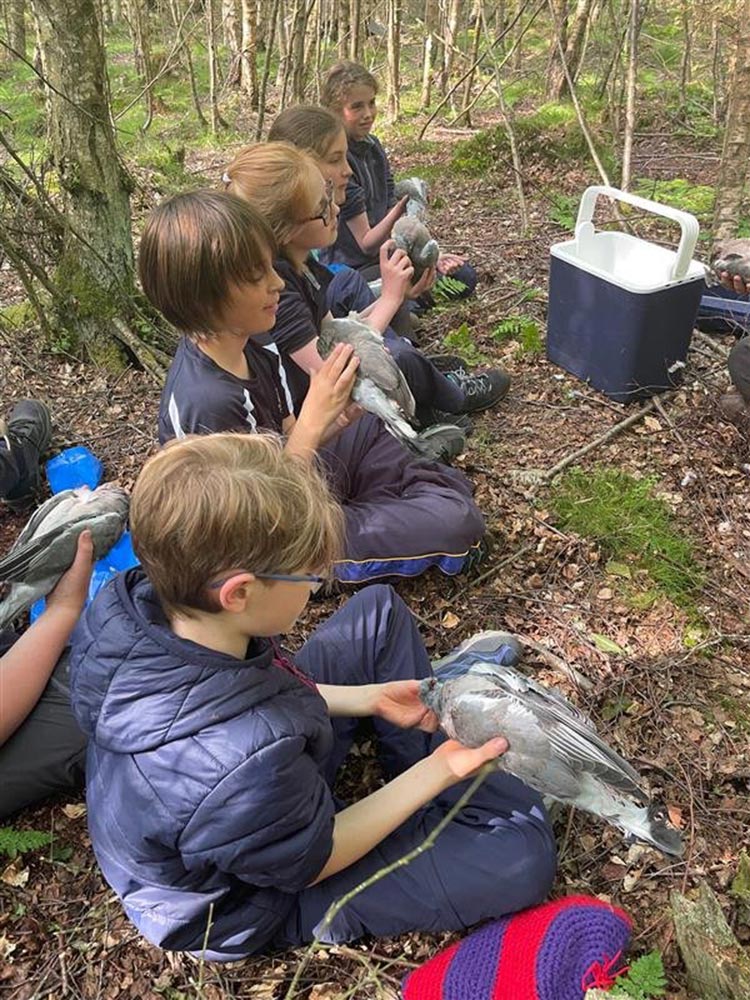 In the morning we lit the fire with the technique our instructor showed us the day before. We made a certain bread called damper bread, which involves self-raising flour and water. We had that with Nutella and jam. It was so good that we all made 2 sort of bread pancakes. We cooked it on some Dutch oven lids. 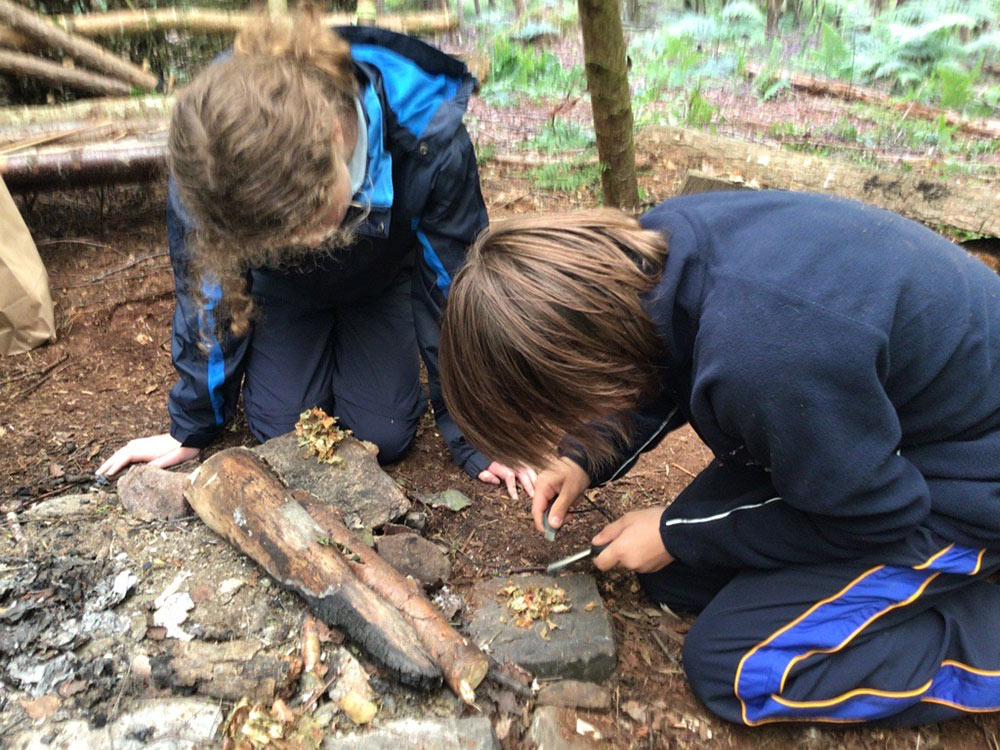 We learnt that this day was to be reserved for making our shelters out of wood, bracken and dead leaves which were apparently good insulators. Our camp was really far away from where the leaves had gathered, we had to do at least 8 trips to collect enough for our den.it made us really tired and but it was really worth it. There were 3 groups/camps and every group made 2 or 3 dens. Our den was long and tall and the two sides were completely open to the wild, there was a small draught but we would be cosy in our sleeping bags. They gave us 2 ways to make them, either a round one with a tree in the middle or a tree at the end with strong poles going across to support the whole thing in the end they were very stable and held up for the whole week. It took 8 hours to make with a small lunch break in between which we felt was well deserved. When we had finally finished making our shelters we were very happy with the result and could not wait to get in. 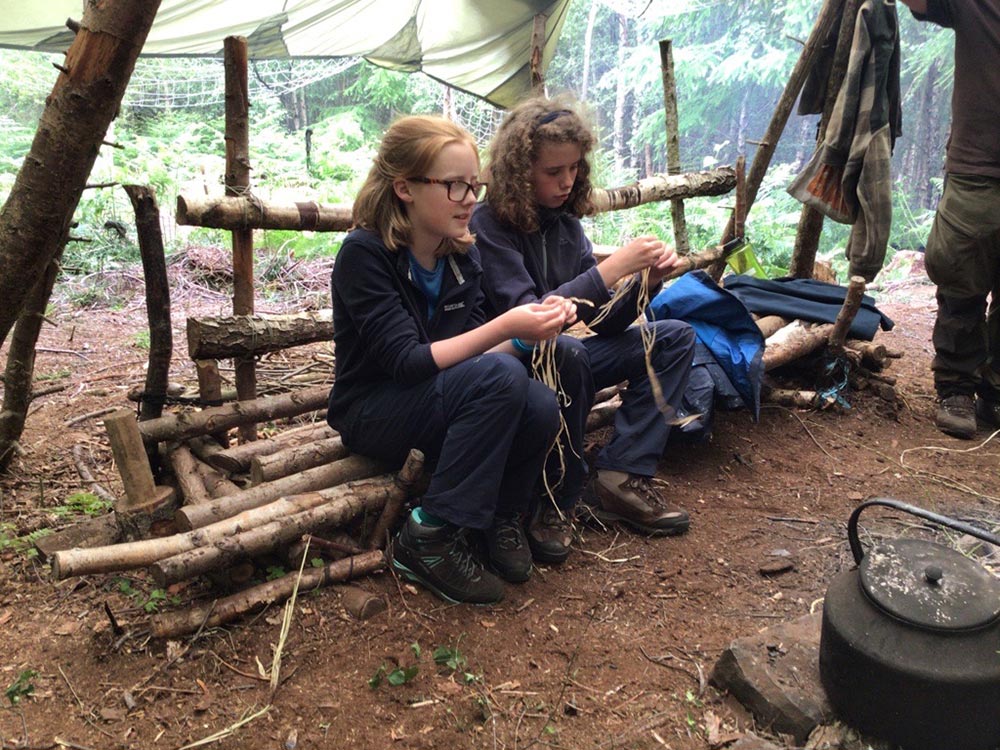 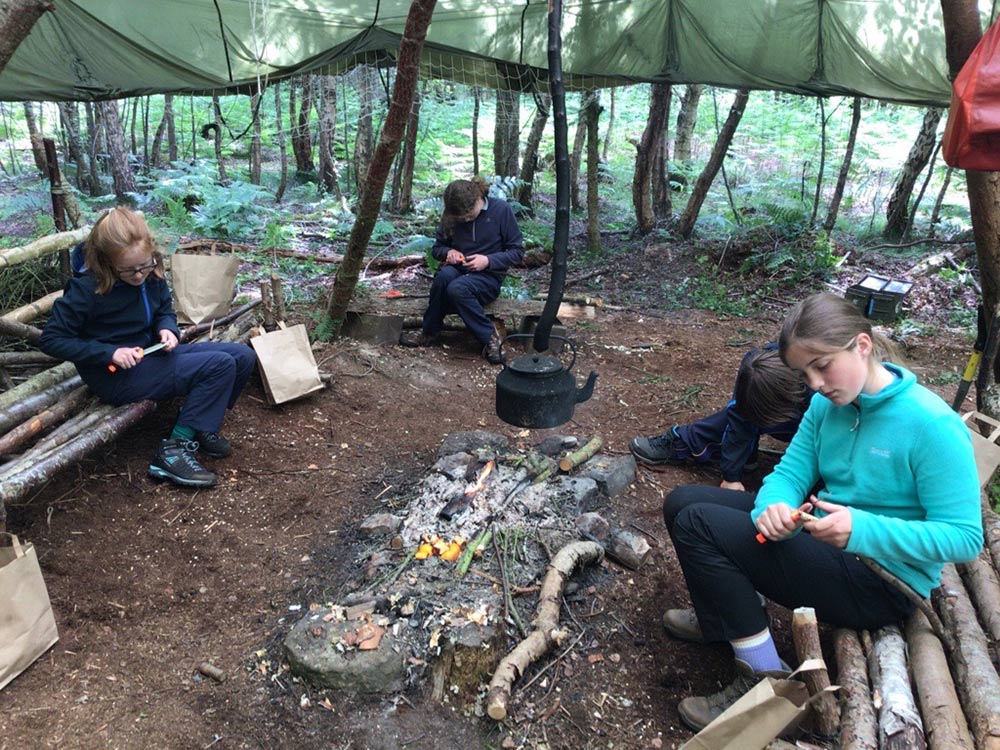 The loo… The dreaded loo. It was a bucket and the loo paper had to be burnt when used. The smell was so bad it put most of us off but it was better then having to dig a hole. There was always a noise, it was the FLIES. They were everywhere and were also swimming In the bucket.

In the evening we had pheasant curry. It was so spicy but delicious. That night we snuggled in our sleeping and bivvy bags and looked like peas in a pod. The bivvy bags kept us dry which we were all very grateful for.

In the morning we waited for the instructor to come and then we lit the fire for breakfast: it was cereal but it was quite cold and the fire warmed us up. We learnt techniques on the fire. Soon after breakfast, we did some carving with sharp knives which involved scraping down to get a smooth edge. We all made butter knives to spread our butter for lunch which was much better than using normal knives; we had sandwiches and crisps all week, which was rather nice because we didn’t have to spend a long time preparing it. In the afternoon we went on a forage and tasted some edible plants and learnt a lot about the woodland. For supper we had rabbit stew with potatoes and vegetables. In the stew there were two rabbits and one hare.

That night it was quite warm they were swarms of midges. Our hands were covered in rabbit blood so Mr Pook had to spray lots of midge spray onto us. The rabbit stew was delicious and I think everyone enjoyed it very much. That night we went to sleep and when we woke up it was a really nice day. But it soon got worse; this was the day when we were to have the deer festival. We did axe and stick throwing which we had never done before. We had a big competition in our three groups that ended up very competitive. We hung up the dead deer using a tripod and began to skin it. We took the nice meaty parts off. The instructors then took the parts and put them in 3 Dutch ovens and put the lids on, then they put them down in the hole which was full of hot ash and hot rocks. 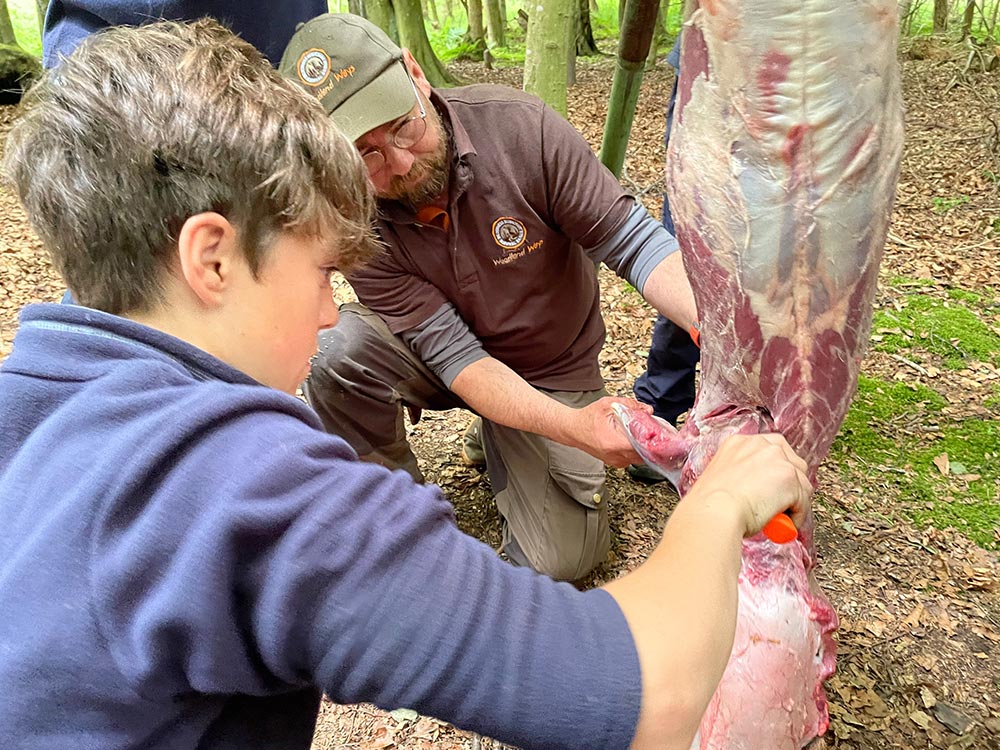 While that was happening we played more games. The food was delicious and everyone really enjoyed it. They put some meat in a stew and burgers and dished it out evenly. Soon after we had eaten we did the washing up, and then had some hot chocolate and marshmallows.

It started to pour with rain. We were not excited about the night ahead. Mr Pook gave us a Twix each in case we woke up at three in the morning and were cold and wet and miserable so we don’t go to him in the middle of the night! We went to our shelter and it was drenched there were puddles everywhere. My mat had a puddle with a spider in it. We were so cold and wet that we didn’t get to sleep for ages and instead just sang ‘Sweet Caroline’! We finally got to sleep. 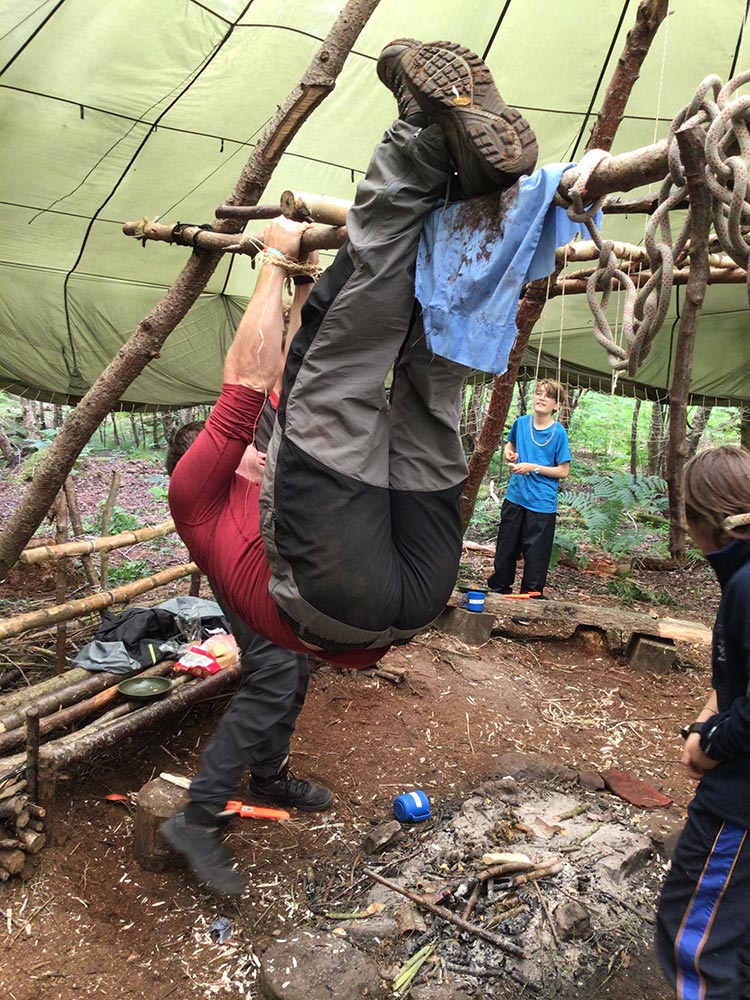 In the morning we were super happy we had got through the night and it wasn’t as bad as we thought it was going to be. We got up and had a lovely breakfast. We had sausages, eggs, bacon, mushrooms and baked beans. We began packing and we were ready to head off but then the kettle poured on Hugo’s foot and he had a big burn which looked incredibly painful. He was dealt with very well by the instructors and we were very impressed how quickly and efficiently he got First Aid and help. We were happy to go back to school with hot showers and flushing loos, but sad to leave bushcraft after an amazing week, where we all pushed our boundaries and tried new things. 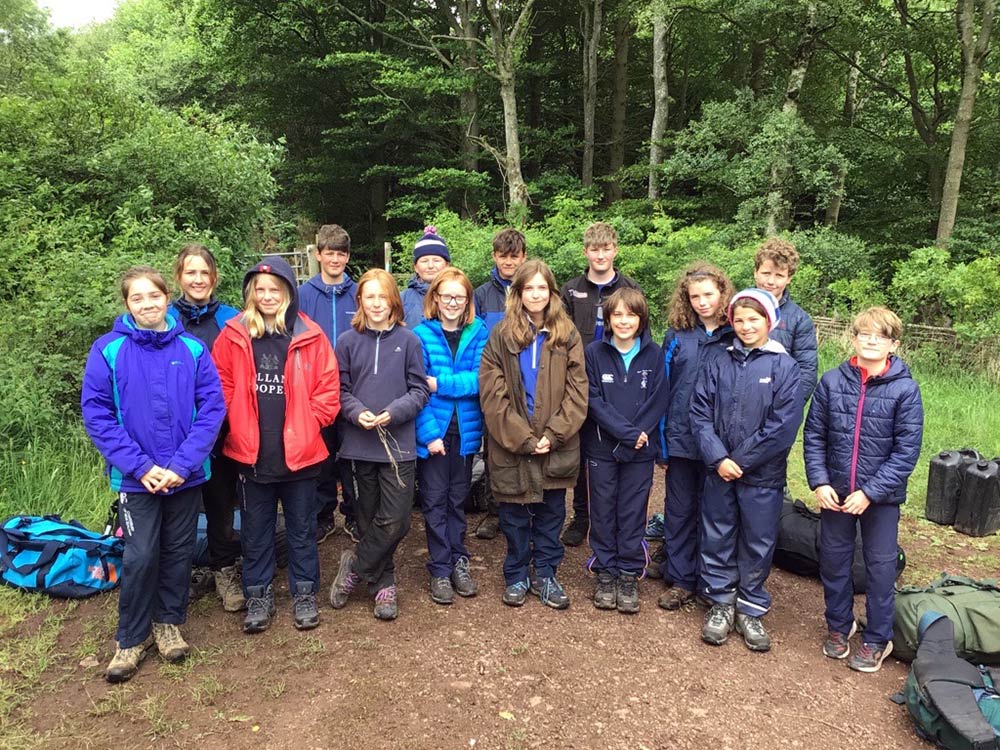