We had previously played Fettes at the IAPS tournament so we knew it was going to be tough but the boys were out to play well. It started out positively; the boys were getting the ball out and finding ways into the attacking D. Unfortunately, we couldn’t hold them off for as long as we did in the tournament. Although the ball kept moving up and down the pitch, we just couldn’t capitalise on our time in the D and they could.

When Pedro managed to score after a great run from George up the right Josh decided it was time to tell me that we were a player short! After putting Pedro back on to make up the numbers the game continued. Fettes made the most of being quickest on the turnover and caught Harry on his own in the D several times, hiking up the score line. At half time the score was 1-5 to Fettes.

Despite the tired legs, the boys worked even harder in the second half. Fettes kept rolling the subs on whilst we stopped to do our shoelaces for a breather instead. This half was even more energetic than the first. The ball was well distributed up the left, mostly, and sometimes the right(!) by James giving Hugo and George the opportunity to get the ball in the D. This time we were able to capitalise with Pedro picking up his own rebound off the keeper and slotting it in the goal.

Saul, Josh and Cosmo kept their sticks low and made some solid block tackles, frustrating the skilful Fettes boys. If they did manage to get through our defence they were faced with Harry, who made the most spectacular save of the season. After sliding in to clear a ball he had to react quickly to save a lifted rebound shot. As he was getting up, he dived backwards to save the ball with his stick, hitting it over the back line. 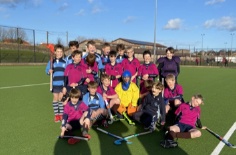 Coaches on both sides had their arms in the air in sheer delight. Fettes did manage to score two more goals but James got the final one of the game. After forcing his way up the left hand side and along the baseline into the D his hit rebounded off the inner right post and onto the backboard. A great way to finish, the boys played the best game of the season to draw the second half 2-2. Well done!

The final score was 3-7 to Fettes.